Hydrogen is the simplest and most common element here on Earth, and indeed in the entire universe. An atom of Hydrogen (Protium) consists of only one proton and one electron. Despite its simplicity and abundance, hydrogen doesn't occur naturally as a gas on the Earth—it is always combined with other elements. Water, for example, is a combination of hydrogen and oxygen (H₂O). Hydrogen is also found in many organic compounds, notably the hydrocarbons that make up many of the common fuels that we use today, such as gasoline, natural gas, methanol, and propane.

Unlike other energy sources such as coal, petroleum, natural gas, solar, wind etc., hydrogen is not a primary energy source. Like electricity, it is a carrier of energy that must be from other energy sources. Hydrogen can be separated from hydrocarbons through the application of heat, a process known as reforming. Currently, most hydrogen is made this way from natural gas. An electrical current can also be used to split water into its components - oxygen and hydrogen. This process is known as electrolysis. Some algae and bacteria are also capable of splitting water to release hydrogen gas, using sunlight as an energy source.

Hydrogen is often called the perfect fuel. Hydrogen is high in energy and can be burned in engines with almost no pollution. NASA has used liquid hydrogen since the 1970s to propel the space shuttle and other rockets into orbit.

When used in a device called a fuel cell it produces electricity, heat and water as its only byproducts. Fuel cells are often compared to batteries. Both convert the energy produced by a chemical reaction into usable electric power. However, the fuel cell will produce electricity as long as fuel (hydrogen) is supplied, whereas the life of a battery is limited by its energy storage capacity each time it is charged.

Fuel cells are a promising technology for use as a source of heat and electricity for buildings, and as an electrical power source for electric motors propelling vehicles. Fuel cells operate best on pure hydrogen. But fuels like natural gas, methanol, or even gasoline can be reformed to produce the hydrogen required for fuel cells.

A long-term energy vision involves the linkage of the electricity and hydrogen as complementary energy carriers. An energy carrier moves and delivers energy in a usable form to consumers. Renewable energy sources, like the sun and wind, can't produce energy all the time. But electricity generated from renewable energy sources can be used to split water to make and store hydrogen till it is needed. Hydrogen can be then run through fuel cells to make electricity for various applications. Hydrogen can also be transported (like electricity) to locations where it is needed.

Hydrogen will provide clean energy for our homes, businesses and transport networks. Hydrogen is a chemical element that exists naturally and unlike fossil fuels will never run out. It offers a way to deliver low carbon energy because when it is burned it doesn’t produce CO₂, just water and heat. 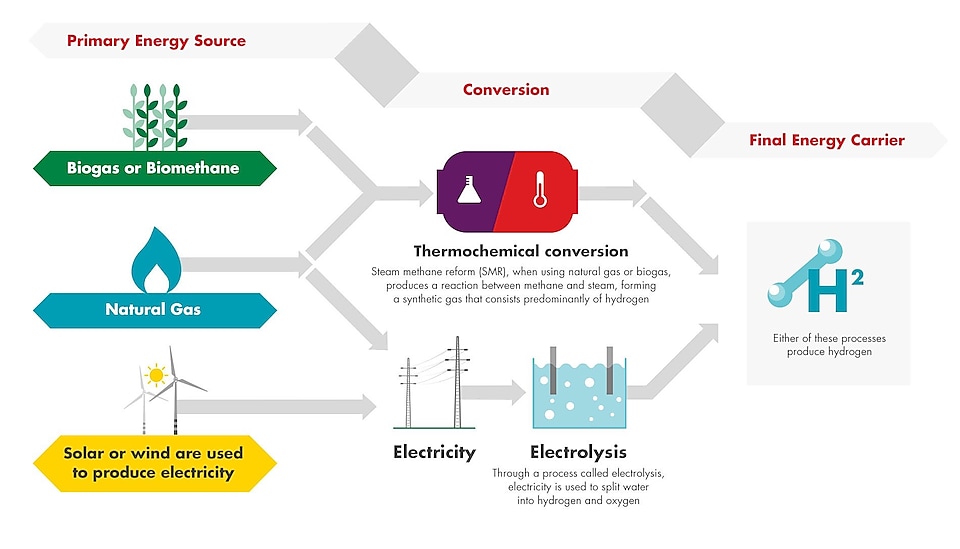