Yasa Ratnayeke, Managing Director /owner of Protium Energy, established the H2 Aberdeen programme at Aberdeen City Council, where he prepared the Aberdeen City Region Hydrogen Strategy and Action Plan. The strategy aims to reinforce Aberdeen’s place in the future as the energy city by using hydrogen and fuel cell technology to enhance the region’s economic competitiveness and maximise the capacity and value of renewable energy to the region. It focuses on delivering infrastructure, working with industry, and creating a centre of excellence for hydrogen and fuel cell technology.

Yasa was involved in all aspects of the programme including project development and preparing business cases and European funding bids. Yasa worked on the contractual structure and negotiated the bus supply agreement and technical specification with Van Hool, the bus lease agreements with First Group and Stagecoach, and the hydrogen supply agreement with BOC Linde. He undertook the design and managed the tender exercise to undertake maintenance depot modifications, ensuring the health and safety and risk assessment were included and considered.

Protium has proven experience working with partners and industry bodies in the hydrogen and fuel cell sector. This experience includes securing funding from the Fuel Cell & Hydrogen Joint Undertaking programmes (FCH2JU), the UK Government’s Office of Low Emission Vehicles and Innovate UK and working with industry bodies such as BOC Linde, Ballard, Hydrogenics, Toyota, Hyundai, Caetano, Wright Bus and VanHool to deliver projects. We have also facilitated the introduction of Hydrogen and Fuel Cell buses into the fleets of the UK’s largest bus operators - First Group and Stagecoach as well as introduced fuel cell cars to Scotland’s National Health Service, Environmental Protection Agency and the City’s taxi companies and car club.

Protium Energy is working with partners to develop a hydrogen hub in the North East of Scotland, which will see Scotland’s first commercial scale green hydrogen production, storage and distribution facility that could supply and fuel Aberdeen’s expanding fleet of hydrogen fuel cell vehicles, and other public and private sector fleets in Scotland. Some of these are funded through the Scottish Government’s £62m Energy Transition Fund.

The Hydrogen bus project developed by Yasa is seen as an exemplar demonstration project across Europe and the project has delivered the following achievements over the last four years of operation: 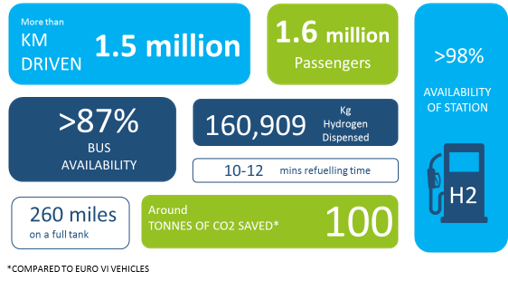 Partners were also key to managing partners expectations, with a key focus of managing the commercial and reputational risks to bus operators, who were demonstrating a new technology in a commercial environment. We also managed dissemination activities, supply chain events and industry days. Over the project life we delivered the following activities: